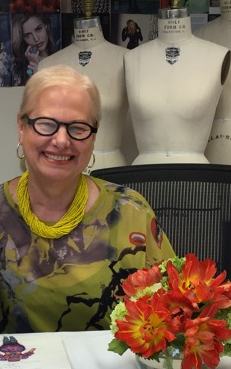 Terry Melville is the founder of THE BETTY CREATIVE AWARDS. As former Vice President/Fashion Director for Macy’s New York, the world’s largest department store, Melville built a reputation as an innovator with exceptional abilities to spot emerging lifestyle and fashion trends around the world and turn them into big business, resulting in Macy’s revolutionizing the department store business and being the must see store in the world. This experience became the foundation for Melville’s work as a consultant.

As a spokesperson for Macy’s and for her entertainment clients, Melville has been interviewed on Entertainment Tonight, numerous talk shows, and network news broadcasts. Her trend forecasts and promotions of projects have been featured in Newsweek, Time magazine, the New York Times and newspapers and publications around the world. Her personal fashion style and home have been featured in Vogue magazine, the New York Times, the New York Times Sunday Magazine, Women’s Wear Daily, W, as well as fashion magazines worldwide. Melville has been photographed and written about for fashion books internationally. Her picture appeared on a billboard in Japan, where she frequently worked with major fashion designers and advised them on doing business in the United States and Europe.

Melville has enjoyed lecturing to students at the Fashion Institute of Technology, New York City, and on various occasions to the fashion industry. She has also lectured at the Kenan-Flagler Business School at The University of North Carolina at Chapel Hill, The Art Institutes of Raleigh-Durham and recently for The Bryan School of Business and Economics at The University of North Carolina at Greensboro. Credits also include lecturing the Victoria Albert Museum in London. Melville has served on the board of directors for the Fashion Group International, the world’s most prestigious non-profit professional organization for the fashion industry.